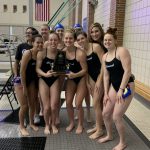 Alayna Heyde set a new school record in diving to lead the way for the Greyhounds at the Metropolitan Interscholastic Conference Championship at Carmel High School. Heyde won the event with a score of 491.40, which was 40 points better than the school record she previously held. Carmel won all three relays and captured championships

2019 carmel vs nc results and scores

The 2019-2020 Winter Break schedule for swimming has been announced. Click below for the schedule.   Swimming Winter Break Schedule