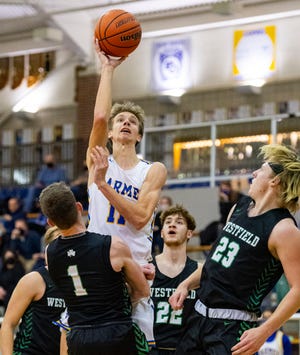 CARMEL – All but one of Carmel’s five previous wins had come by fewer than 10 points, including two in overtime. Maybe it was the opportunity to play an undefeated team, ranked in the top five, that sharpened the Greyhounds focus on Saturday night.

The result was a resounding 54-30 victory for Class 4A second-ranked Carmel over No. 5 Westfield.

“We kind of challenged the guys after the game (Friday night) that it’s more mental than it is physical,” Carmel coach Ryan Osborn said, referring to his team’s 51-44 overtime win over Center Grove. “Being locked in is so important defensively. I think for us, that’s our mindset. We have to get better defensively. We’re nowhere near where we need to be. We’ve won some games and had some success, but that doesn’t mean anything. You still have to defend.”

The numbers would show that Carmel (10-0) defended well on Saturday against a Westfield team that was averaging 70.5 points per game. The Shamrocks committed 13 turnovers, shot 38% from the field and were just 3-for-8 on free throws (shooting 78% coming in).

But Osborn made it a point, even with an 11-point lead early in the fourth quarter, that any defensive lapses would not be tolerated. After Westfield junior guard Braden Smith drove to the basket and scored uncontested, Osborn called a timeout. Carmel led, 38-27, with 6:52 left.

“It was more of a ‘finish the game message’ too,” Osborn said. “You can’t be a team that relaxes when you get a little bit of a lead or be known as a team that is really good when things are going well but not very good when it hits some challenges.”

From there, Carmel slammed the door on any thought of a comeback by outscoring Westfield 16-3 the rest of the way. Brian Waddell led the Greyhounds with 17 points, including three 3-pointers in the first half as Carmel built a 15-point halftime lead. Sam Orme added eight points and four rebounds and senior point guard Connor Gioia, working his way back after missing four games due to contact tracing added eight points and four assists and did the bulk of the defensive work on Smith, holding him to seven points, well below his average of 17.1.

“Connor did a great job,” Osborn said. “The guys that were guarding the screeners were great helpers, too. When we’re connected like that defensively, guys see the things we can do.”

Carmel shot 59% from the field in the first half and finished 6-for-14 from the 3-point line. The much taller Greyhounds also outrebounded Westfield 26-13. Cam Haffner was the only Shamrock in double-figure scoring, finishing with 12 points.

“We gave up way too many offensive rebounds,” Westfield coach Shane Sumpter said. “You can’t give a team like Carmel second and third shot opportunities. It seemed like that was pretty consistent throughout the night. You’re obviously not going to win very many games scoring (30) points. Credit them defensively. And some of the easy baskets we did seem to get — they didn’t fall.”

“It shows where we need to get to at the end of the day,” Sumpter said. “We can look at ourselves, starting with me, and we have to get better. If we’re going to get the ultimate goal we want to get, that’s one of the teams we have to beat. We have a lot of things we have to do to get better and that showed tonight. We will. Our guys will come back in the gym and better.”