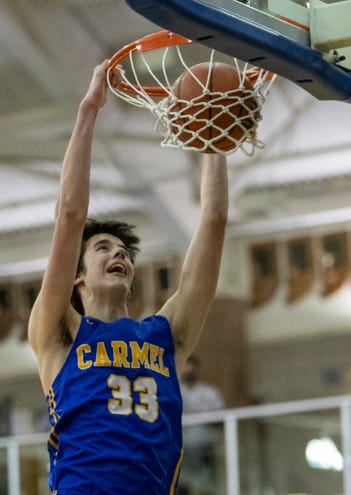 After hitting a pair of 3-pointers in its first few possessions, Carmel would hit just one more shot from outside the arc the rest of the way. Largely because it didn’t need to. Charlie Williams and Brian Waddell, both 6-7, combined for 32 points in Carmel’s 53-27 win. It marked Carmel’s seventh consecutive sectional title.

“Our spacing was really good, which we knew was going to be key, especially against a team that doesn’t have the same kind of size and length” Carmel coach Ryan Osborn said. “…When you’ve got guys inside that can finish, it makes the shots a lot easier.”

Waddell had seven of his 13 points in the first quarter as Carmel (22-2) raced out to a 16-7 lead, hitting seven of its first nine shots. Westfield trimmed the deficit to 20-14 midway through the second, but Carmel answered with an 11-0 run that was fueled by a steady dose of inside dominance. During that spurt, Williams had six of his team-high 19 points. Carmel led by 13 at the half and never looked back.

“It’s definitely one of the better games I’ve had this season,” Williams said. “I’ve got to give it to my teammates. They got me going. Whenever it’s tournament time, we’ve always got to pick it up.”

Waddell, a senior, knows every game could be his last. But Williams still has another year to get better.

“If you think he’s good this year,” Waddell said of his teammate, “next year, he’s going to be even scarier. He’s somebody we can always rely on to play inside and out. He’s always making big plays.”

Osborn lamented his team’s timidity in its sectional semifinal win over Hamilton Southeastern. That was replaced with early aggressiveness Saturday night.

“If we could come out and see the effort early, that was going to be big for us,” he said.

The Greyhounds consistently beat Westfield (18-5) down the floor, and even their misses were often followed by offensive rebounds and second chances. Williams missed a layup in the third quarter, grabbed his own miss on the other side of the basket and put it back for a score. And it wasn’t just the big guys. After an offensive rebound following a missed free throw late in the third quarter, Connor Gioia drove inside for a layup. Gioia, 5-8 and the shortest player on Carmel’s roster by four inches, hit the contested shot. For good measure, he was fouled and converted on the three-point play.

It was just that kind of night.

Carmel dominated on the glass, with a 25-8 rebounding edge. It held Westfield to 24% shooting from the floor and 19% shooting (3-of-16) from behind the arc. Just how good were the Greyhounds defensively? Westfield’s Braden Smith had 18 points. The rest of the Westfield roster combined for just three field goals, shooting 3-of-20.

“We have a good team defense,” Osborn said. “It wouldn’t be as good as it is if the kids weren’t totally bought in. They’ve seen the development, they’ve seen the growth. They’ve soaked it in and embraced it and they’ve convinced themselves that it’s important. You get their best effort every night.”

As impactful as Carmel’s length is offensively, it’s just as important on the other end.

“It helps us on offense, but I think defensively it’s more of a factor,” Waddell said. “When we see people coming, we know they’re going to have a lot to go through with our length.”

Carmel has its eyes set on a much deeper tournament run. But the seventh straight sectional title was just as sweet as the previous six. And given the uniqueness of this season, this one might have been sweeter.

“It’s never about ‘How many?’ Let’s be as good as we can be and enjoy it while we’re here,” Osborn said. “In this year especially, as difficult as everything has been, I’m so happy for these guys. To weather everything that we’re going through and be able to experience this on a championship night.”