LAFAYETTE – In a game that featured four players that stand at least 6-7, it was the littlest guy on the court who made the biggest plays. Go figure.

Carmel is heading back to the Class 4A state finals for a third straight season after holding off Gary West Side, 53-50, in overtime. Connor Gioia led the Greyhounds with 16 points, including seven in overtime. He hit 10 of his 12 free-throw attempts and 5-of-6 in the extra period.

“Connor may be little, but he doesn’t play little,” Carmel coach Ryan Osborn said. “He’s one of the toughest dudes out there.”

Carmel led by as many as six in the third quarter, but Gary West came back to take a 34-33 lead midway through the fourth. Carmel answered with a run to take a four-point lead, and it looked like the Greyhounds would finish off their win in regulation. But Gary West’s Chrishawn Christmas got a steal and a layup to tie the score, then Gioia was called for a charge on the other end. Gary West held for the last shot and had a chance to win, but the shot went off the back of the rim. 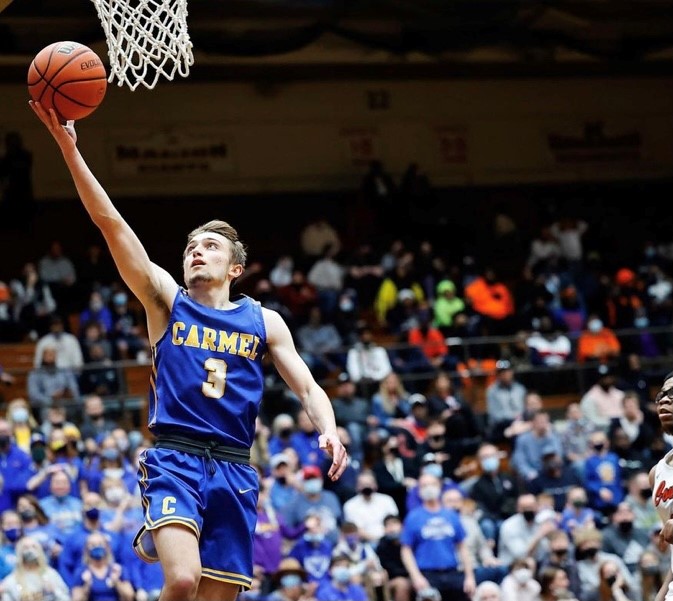 “The thing about Connor is, if he makes a mistake like that (charge), (and) he lost his guy late in the game, he’s going to make up for that,” Osborn said. “You don’t even have to say anything to him, you know he’s gonna make up for it. The stop at the end of regulation was huge. I felt like that gave us some positive momentum going into overtime.”

Carmel never trailed in overtime. Samuel Orme hit the biggest shot of the period, a 3-pointer to give the Greyhounds a 46-42 lead. Gary West trimmed the deficit to two points several times, but Gioia scored Carmel’s final seven points. His late steal and free throws gave Carmel the final bit of breathing room it needed. His final two free throws gave Carmel a five-point lead in the closing seconds before the Cougars made one final shot.

“It’s just great to be able to have an opportunity to play this year because it got cut short last year, so to know we can make it to the state championship game is great for this group of guys,” Gioia said. “Credit to (Gary West). Their pressure is good. They’re physical. But we just regrouped and told our guys in overtime, ‘This is our game to lose. Handle the pressure and make free throws.’ That’s what we did.”

Brian Waddell scored 13 points for Carmel. Charlie Williams had seven while Orme and Josh Whack had six each.

The win sets up an all-Metropolitan Interscholastic Conference battle for the 4A state title for the fourth consecutive year as No. 2 Carmel (25-2) and No. 3 Lawrence North (28-2) will meet April 3 at Bankers Life Fieldhouse. Carmel won the regular-season meeting between the two teams, 63-49.

“We played them well the first time, but we know they’ll be more than ready to play this time,” Gioia said. “We’ve got two weeks to prepare. We’ll get their best shot at Bankers Life.”