It was supposed to be a rebuilding year for the Greyhounds. It would be hard to argue after last year’s senior class had carried the program to two straight state championship game appearances. Coach Osborn’s team proved the doubters wrong as they responded to every possible challenge in route to a Sectional 8 championship at Noblesville High School. Carmel defeated #5 Hamilton Southeastern in the first round 50-43. A last second jumper from lone senior Jackson Jannsen lifted the Hounds over the host Millers 39-37. In the championship game, sophomore Pete Suder lifted Carmel to an early first quarter lead and junior Brian Waddell took over in the second half to finish with 26 points. The Greyhounds defeated Westfield 54-41 for their sixth straight sectional championship. It was the 8th sectional title in the last 9 years.

Carmel advances to the Regional at the historic Logansport Berry Bowl on Saturday, March 14th.

Tickets for the regional will be available at the door. $10 both sessions. $8 single session ticket. 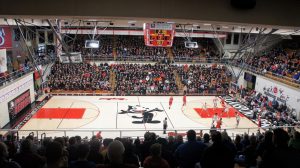 MIC Championship
8:30 am
View All Events