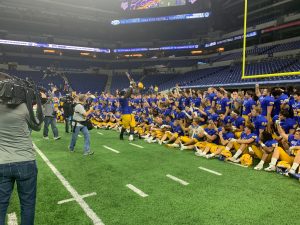 For more information on how to subscribe to the Reporter, visit https://readthereporter.com/subscribe/
INDIANAPOLIS – Carmel football coach John Hebert said this about his team’s attitude leading up to the Class 6A state championship game: “It was all business.”
The Greyhounds took care of business in every aspect – offense, defense, special teams, clock management. It all added up to Carmel’s ninth football state title, which it won 20-17 over Center Grove Saturday night at Lucas Oil Stadium.
After a tough first quarter, the ‘Hounds got their offense going in the middle periods to take a 20-3 lead. Carmel then held firm in the fourth quarter when the Trojans made their expected comeback. Two big third-down conversions by senior running back Dylan Downing clinched the game for the Greyhounds.
“It was a team effort, special teams and defense with four turnovers in the first half, and then our offense woke up and started really playing hard and making plays, putting points on the board,” said Hebert.

Center Grove received the ball to start the game, and that first drive took up just over six minutes of the first quarter. It also resulted in the game’s first points, when Austin Watson made a 22-yard field goal to get the Trojans on the board.

Carmel responded a few minutes later, with Spencer Hanna making a 42-yard field goal to tie the game at 3-3. The Greyhounds’ defense was doing its job, recovering three Center Grove fumbles in the first half.

Meanwhile, the Carmel offense got going in the second quarter. Gabe Quigley threw for the Greyhounds’ first touchdown of the game, teaming with Baron Smith for a 48-yard TD reception. Hanna made the extra point.

Quigley played outstanding during the post-season. He was moved into the quarterback role after an injury to Christian Williams during the first half of Carmel’s regional game with Homestead. Quigley stepped up in the second half of the regional game, then Hebert said the senior played “flawlessly” in the Greyhounds’ semi-state win over Merrillville.

“He played several plays here with what could be a broken shoulder and he would not come out,” said Hebert. “We had to force him to come out. And he was making plays and getting first downs. He just did not want to let his teammates down. I think that inspired our sophomore Zach Osborne, who came in and was really steady, took control of the game and took care of the ball and we were able to convert on getting first downs and able to roll down the clock.”

The Trojans made another long drive during the final six minutes of the period, but it was halted when Ty Wise intercepted a pass at the Carmel 17 and took it into Trojan territory. The Greyhounds pushed it down to the eight-yard line, where Hanna made a 25-yard field goal, giving Carmel a 13-3 halftime lead.
Zach White gave the ‘Hounds a rushing touchdown late in the third quarter, powering into the end zone on a 10-yard run. Hanna’s kick made the score 20-3.

But Center Grove made it interesting in the fourth quarter, as Trojans’ quarterback Tayven Jackson threw two touchdown passes. His first one came in the early part of the period, on a 41-yard throw to Trent Veith. After holding Carmel to a three-and-out, Center Grove made another scoring drive that took it down to the Greyhounds’ 11-yard line. Carmel’s defense got Jackson on the run, but he found a wide-open Mason Long for another TD throw. Watson made both extra-point kicks.

The Trojans tried for an on-side kick, but Ty Pennington recovered it for the ‘Hounds at the 50-yard line. Center Grove held Carmel back to third-and-10 on the 50, but Downing kept the drive going with a 17-yard run, giving the Greyhounds a first down.

Center Grove had already taken a timeout, and they used their other two timeouts during Carmel’s next sequence. Still, the Trojans were able to get the Greyhounds into another third-down situation. But never fear, Downing was there, making a nine-yard run for a first down with the clock at 1:39. After that, Carmel took a knee, and had the trophy.

“They’re going to make their adjustments and we have to be able to capitalize on them and we did,” said Downing.

“That 17-point lead, they weren’t going to go away,” said Hebert. “We knew that we were going to have to claw and scrape and put it together. I’m happy that it fell on our offense there at the end because it really sends a message to the young players in our program that taking care of what you can control on your end and running out the clock takes the doubt out of the picture.”

Downing finished as the game’s leading rusher, with 102 yards on 11 carries. Quigley completed 5 of 8 passes for 93 yards, with John Rogers making two receptions. Ty Wise led in tackles for Carmel with 13 total stops (10 solo and three assists), while Sam Saliba had 10 tackles (five solo and five assists).
Carmel finished its season 11-3, while Center Grove completed its season with an 8-6 record.

No Events This Week

Events are added by athletic staff.
View All Events